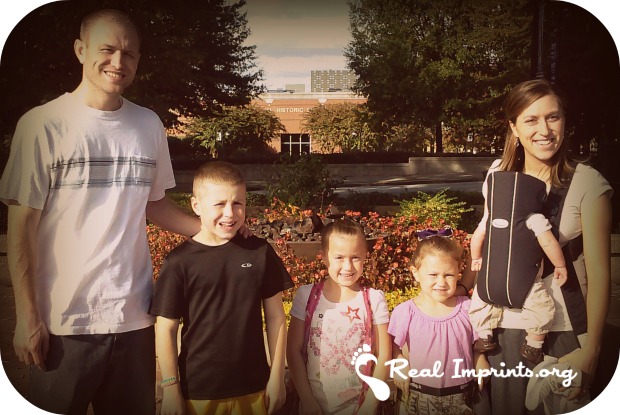 As a mother of four children, I enjoy watching each of my children shine. They each are so gifted and talented. But I have also seen them struggle through their own personal weaknesses. Those moments are hardest as a parent to watch. But as my children deal with their challenges I have seen my kids greatest strengths come to light. I have seen them work hard and stand a little taller and be a little stronger as they learn how to overcome their trials.

I really grasped this idea as my oldest son Kaden, who is nine years old, had a hard time in school. A couple of years ago, our family moved from Idaho to North Carolina.  None of us ever anticipated what challenges we were going to face as a family once we got here. Everything was so new and we were trying to adjust, because everything felt and looked so different! If this alone wasn’t frustrating enough, Kaden was also struggling with school. He was in the second grade at the time. He was a smart kid, knowing his math facts and reading fluently. His struggles came in the form of listening, following directions, paying attention to details, organization, etc. He never misbehaved, but due to these difficulties, it affected his academic performance. The teacher began to indicate that there might be a need to test him. I didn’t like that my son was being labeled and I worried that they thought or attributed his struggles to ADD. What I was seeing reflected what I was witnessing at home. I began to feel frustrated…at the teacher, at the school, and even at Kaden. I was even feeling anxious from day to day worrying about what was happening at school. This feeling of frustration really propelled me to figure out if there was something more going on. I wanted to understand him better so we could all be a little more patient with him.

The problems persisted in the third grade. His academics were still not where they should be, but his self-esteem and confidence was taking its toll. His excitement toward school …well, there wasn’t any. In January of 2012 I received a call from his teacher asking me what to do with him, because she just didn’t have any more ideas how to help him. This was a turning point for me. I had had enough and so I began to follow my mommy intuition.

I had felt for a while that what he was struggling with was Auditory Processing. I knew nothing about it, but just followed my GUT, and scheduled him with an audiologist. The audiologist specialized in testing pertaining to learning disabilities. After the testing, my intuition proved right…he had auditory processing disorder in a few specific areas (Phonemic decoding, Tolerance Fading Memory, and organization). But it also confirmed that he was just a healthy and energetic nine year old.

Moving forward into fourth grade, we were feeling energized about school, and so was my son. It was going to be a different year because we now had the tools to take on the struggles and make something positive happen. And so far it has. We have been able to join together as teacher, parent and counselor to make school a positive environment for Kaden. As we sat down in the meeting with the councilor, she thanked me for actually bringing all this to the table. She had never had the opportunity to work with a child that struggled with auditory processing. She contacted all the other councilors in the district and all but one had never dealt with this also. She said she has learned so much with what I have showed her and she has since then included other professionals with my information including the speech and language pathologist. It was rewarding to me to know that what I did and the inspiration I followed has helped others so that other children can be helped.

There are still steps to take, grades to work on, and hurdles to overcome, but the progress is moving forward. We have taken him to other places including a Brain Balance Center to learn how to strengthen the brain so that these issues aren’t an issue anymore. I can’t even express how much better I feel. I am still concerned and working with Kaden, but I am happy and proud of him.

But what has been the greatest blessing is watching Kaden work hard. He has developed his own strategies that enable him to succeed because he has a teacher that believes in him and understands how to help him succeed. He has learned what he needs to do to overcome his challenges. He doesn’t give up as often, finds success in academics, and proves that he is capable every day. Thank goodness I followed my mommy intuition – or inspiration from our Father in Heaven- and moved forward with something unknown and familiar. If I hadn’t done so I would never have seen my son as the amazing person that he is. His struggles lifted him to be something better, to discover more about himself, and for that I am forever grateful!