Thomas smiled at me as I held him in the ICU, a few weeks into his hospitalization status post open heart surgery, and began singing to him what has become our song:

I’ve heard it said
That people come into our lives for a reason
Bringing something we must learn
And we are led
To those who help us most to grow
If we let them
And we help them in return
Well, I don’t know if I believe that’s true
But I know I’m who I am today
Because I knew you . . . 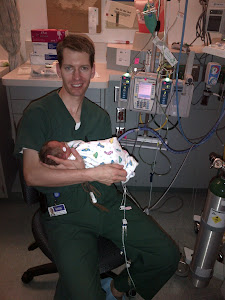 I’m the first to admit I always dreaded having a child with Down syndrome (Trisomy 21).  My wife and I promised ourselves we would be done having our family by age 35 because we couldn’t accept the increased risk of aneuploidy that comes with advanced maternal age.  With all my wife’s pregnancies we declined early genetic testing because we told ourselves that we wouldn’t terminate a pregnancy, yet we always hoped and prayed that our child would be normal.  It’s not that I ever had anything against people with disabilities; I just didn’t know how to relate to them.  I didn’t know what to say to them or how to interact with them, so I conveniently ignored them.  I didn’t know how to love them.

Thomas’ 20 week ultrasound didn’t show anything wrong.  In fact, it didn’t show a clear picture of much at all.  It was on a subsequent ultrasound a month later that our obstetrician saw a possible heart defect that catapulted us into, what is for many expectant parents, the nightmare world of perinatology, high level ultrasounds and fetal echocardiograms, genetic testing, and prenatal cardiology.  “Yes,” we were told, Thomas had a heart defect—a significant one.  The one most commonly associated with Trisomy 21.  Lucky for us, a new genetic test was available with nearly 98% accuracy and no risk to the fetus, unlike with amniocentesis or chorionic villus sampling.  “Yes, lucky us,” I thought sardonically.

I vainly wished and hoped and prayed for all the wrong things.  I pleaded that Thomas would be normal and that his heart would spontaneously mend and be all better by the next ultrasound.  I begged God that Thomas wouldn’t have Down syndrome or Edward or Patau syndrome or any other syndrome.  I didn’t want this to happen to me.  I wanted all my children to be brilliant—erudite scholars of great renown who would one day change the world.  What parent doesn’t want his or her kid to be smart?

When our obstetrician delivered the test results, he added that it was ok (even in the context of our shared faith) to think about terminating the pregnancy given the serious physical defects.  I’m now ashamed to say that after this physician gave us the option to mentally go down that road, I wondered if we were doing the best for this soul allowing him to be born with such defects.  In truth, I wasn’t worried as much about how the condition would affect the child as I was about how it would affect me.  I am eternally gratefully that my wife insisted on keeping this child without any hesitation or reservation.

I called my mother after receiving the test results, and I will never forget her response when I told her that our little boy tested positive for Down syndrome: “Lucky you,” she said, not a hint of sarcasm in her voice.  She proceeded to tell me about one of her clients, someone with whom I went to high school but have not kept in contact, who adopted a child with Down syndrome.  “This child has been a huge blessing to their family,” she said, “In fact, anyone who has one of these special children will tell you what a blessing they are.  So yeah, lucky you.”  I used to think that people who said that were giving themselves the equivalent of a participation trophy, but something in that moment that I can only describe as an act of God made my heart begin to soften.  I really did begin to feel lucky.

Through several other personal, sacred experiences I began to see Thomas coming to our family as a divine blessing.  I looked forward to meeting this special child when he came, as I imagined he would be, “trailing clouds of glory.”  His actual birth was something a little more harrowing.  He was born by emergency cesarean section after a few dangerous heart decelerations during routine monitoring and an ultrasound that showed no amniotic fluid.  As a medical professional I remained calm—summoning the same clinical detachment I’ve needed on multiple occasions watching patients die—but was inwardly horrified when my tiny, cyanotic infant failed to cry or to move or to pink up during bag mask ventilation.  I pleaded with God for his life while he was suctioned and intubated.  I wanted every possible intervention for Thomas.  My heart had been changed and I felt nothing but love for him.

I now write this in Thomas’ hospital room on the surgical floor at Seattle Children’s where he is sleeping peacefully.  He has endured three surgeries and over two months of hospitalization during his five and a half months of life.  Yet, I never wonder now if we did the right thing keeping him, despite all he has endured.  This refiner’s fire is not for him, but for me.  I hope that in the end I will be as good a person as he already is.

At the risk of sounding cliché, my family and I have been blessed beyond measure through all of this.  We have received kind notes, monetary gifts in excess of thousands of dollars to defray travel expenses and medical bills, and offers to watch our three other children.  People we had met only briefly opened their homes to us when we needed a place to stay.  Many of these individuals gave not of their abundance, but the widow’s mite.  We all have been touched by a spirit of love and compassion that Thomas has brought to the world and that seems to radiate from him.  Our friendships are richer.  Our older children have become more caring.  Our desire to help others is stronger.  Our lives are fuller because of him.

I now come to my point.  I don’t know the latest statistics on how many fetuses with Trisomy 21 are aborted (at one time I know anecdotally it was quite high), but I must say in the

strongest terms of which I am capable that this practice must cease.  Perhaps not every expectant mother is ready to raise a child, much less a child with extraordinary needs.  There is a solution: adoption.  I recently learned that there is a waiting list to adopt a child with Down syndrome.  Some couples wait upwards of three years for one of these children because they, unlike me before having Thomas, already know just how truly awesome these children are.  To any expectant parents who are struggling to decide whether or not to abort a fetus with Trisomy 21, I plead with you not to shortchange yourselves.  If we do not stop aborting these children, we collectively rob ourselves of the noblest, best, and brightest members of society—the ones who really have the power to change us and the world for better.

It well may be
That we will never meet again
In this lifetime
So let me say before we part
So much of me
Is made of what I learned from you
You’ll be with me
Like a handprint on my heart
And now whatever way our stories end
I know you have re-written mine
By being my friend . . .

This story appeared on Real Imprints.